I am excited to unveil two elegant guest rooms at The Bernards Inn.  They are the final rooms of my exclusive collection, “The Somerset Hills Inspired – Rooms of Distinction.”

As the in-house interior designer at the Inn, I have been putting my original concept into action over the last several years and now the collection of historically influenced rooms is complete.  As owner and designer of Butler’s of Far Hills, and creator of “The Signature Style of Entertaining,” exclusive to the Bernards Inn, my design concept relates the guest rooms to the stories of the stately Somerset Hills estate homes. 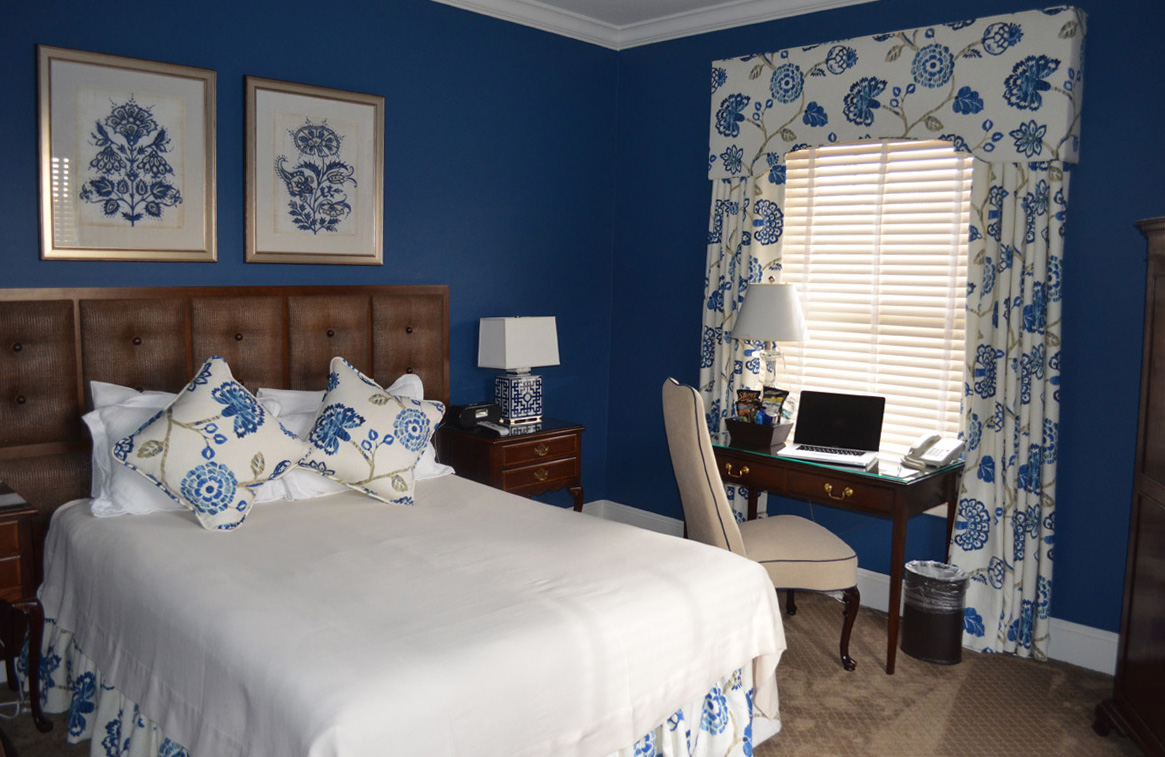 Room 17 is named after the mansion Oakdene and its design style is influenced by the original owner of the mansion.  Oakdene was built in 1892 by New York businessman Charles W. Ide.  He moved to Mendham seeking a tranquil country home.  Ide was president of the New York Cotton Exchange, and later a general partner in the cotton business of Weld & Neville.  Cotton played an important role in the history of the British Empire, United States, and India, and especially in the expansion of travel and trade.   The importance of this trade was also present in the exchange of furniture styles, craftsmanship, and textile design and materials.  I recognized the importance of the British expansion also in the influence of furniture and décor style.  This translates to the British West Indies flavor of Room 17. 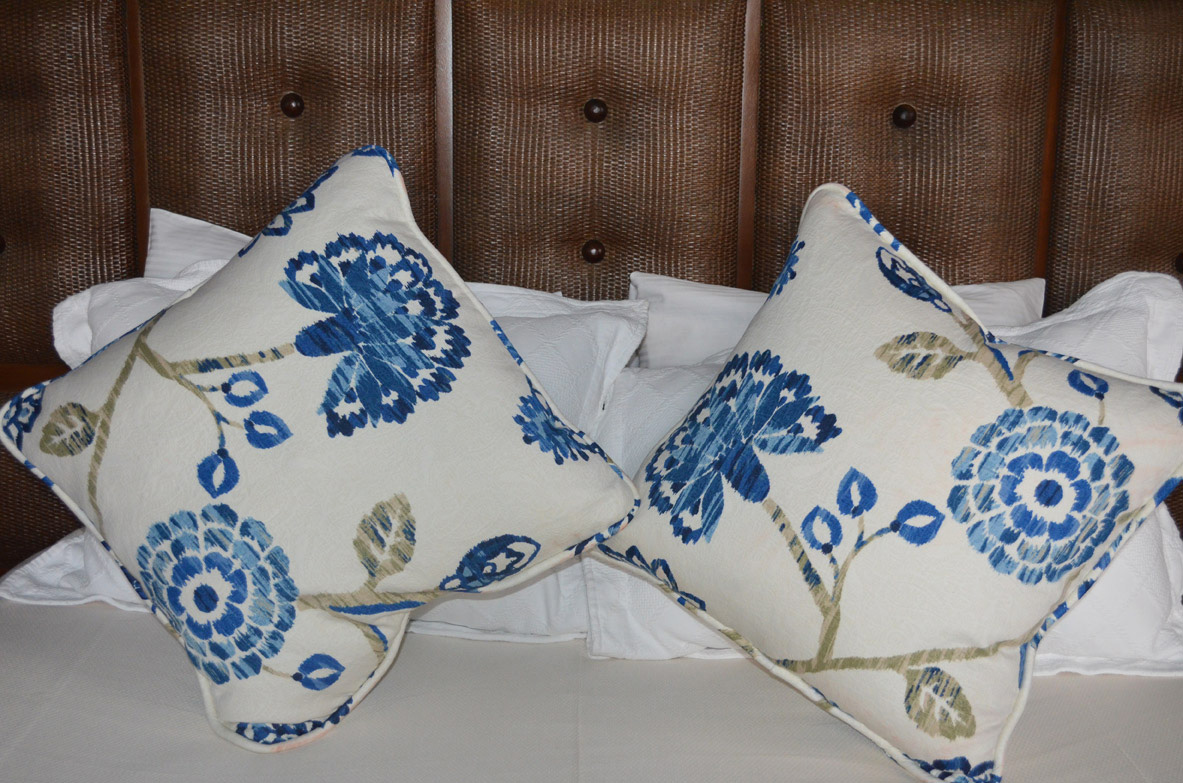 The solid dark woods, Asian influenced porcelains, and color palette are reminiscent of the blending of English designs with the islands’ native influence from the British travels in the late 19th century.  Located at the upper west corner of the inn, Room 17 receives the most natural light, therefore, I elected to use a darker wall color, in contrast to Room 18 across the hall.  The bed is dressed in quilted cream linens accompanied by graphic pillows with a cream background and blue print, which is reminiscent of hand dyed textiles.   The indigo blue wall color is infused throughout the room -- printed on the pillows and draperies, touches in the lamps, and the wall décor.  I added a touch of modern influence in the design of the bed.  The upholstered rattan headboard is rich in color and texture and creates a wall of interest.  Featured over the bed are framed hand embroidered pieces with traces of indigo blue.   A 19th century small wardrobe with English influence in dark mahogany wood accommodates the television and guests’ clothes during their stay.  The guest room features a rattan desk chair and Asian influenced blue and white accessories and lamps, again exemplifying the melding of the British, Asian, and Indian styles and motifs. 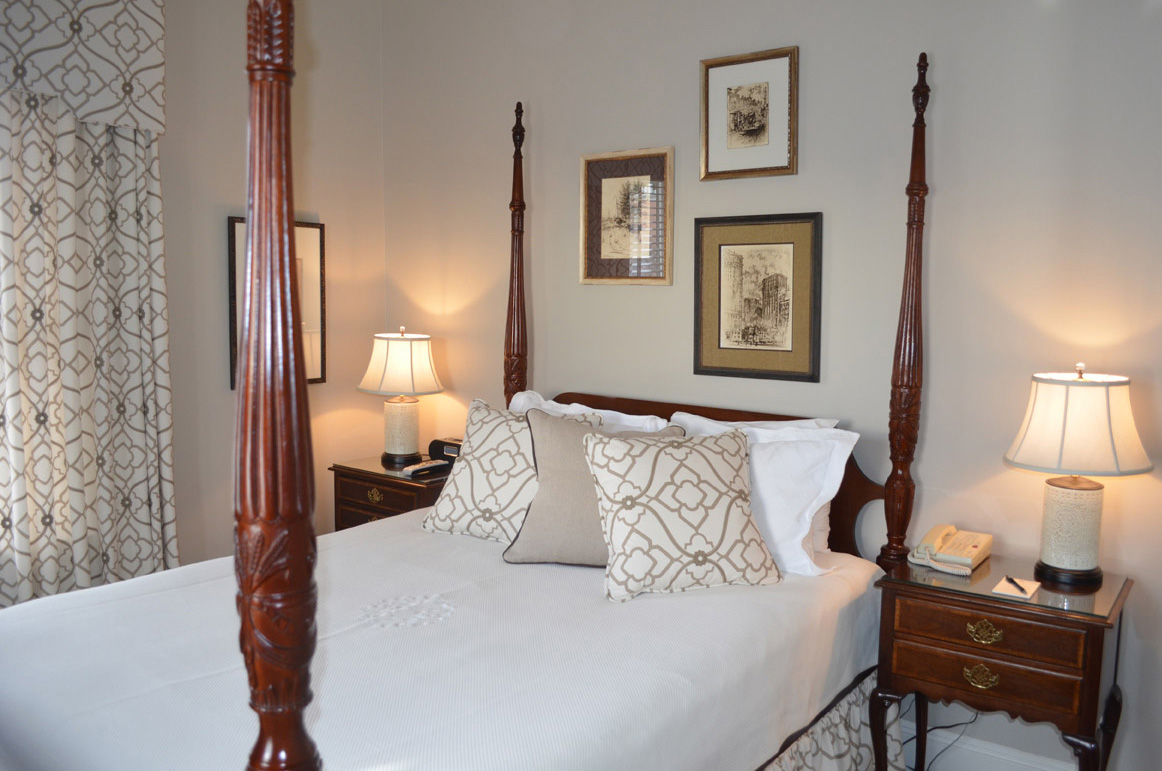 Room 18 is named after the Bedminster estate, Glenelg. The home was originally named after a village and mountain region adjacent to the Isle of Skye in Scotland.  The original owner, Arthur Anderson Fowler, built the home in 1907 as a weekend foxhunting retreat of relatively modest size and eventually amassed an estate of about 250 acres.  The estate includes an extensive family home, stable and cottage. The renovations completed on Glenelg in 1915 were admired by professors of architecture for the simplicity of its architectural lines.  By eliminating unnecessary decoration, the house was clean and quite modern for its time.  Stucco finished and simple on the outside, the inside had notable elements of detail — a vaulted decoratively plastered ceiling in the new living room and detailed chestnut paneling.

The design décor for Room 18 is influenced by these 1915 renovations to Glenelg.  The renovations were in keeping with the Moorish ideas of architecture which are clean and seemingly simple in design yet with finely detailed pieces, particularly on the inside of the home.  The home’s stucco finish and detail over the front door reveals a Moorish motif. 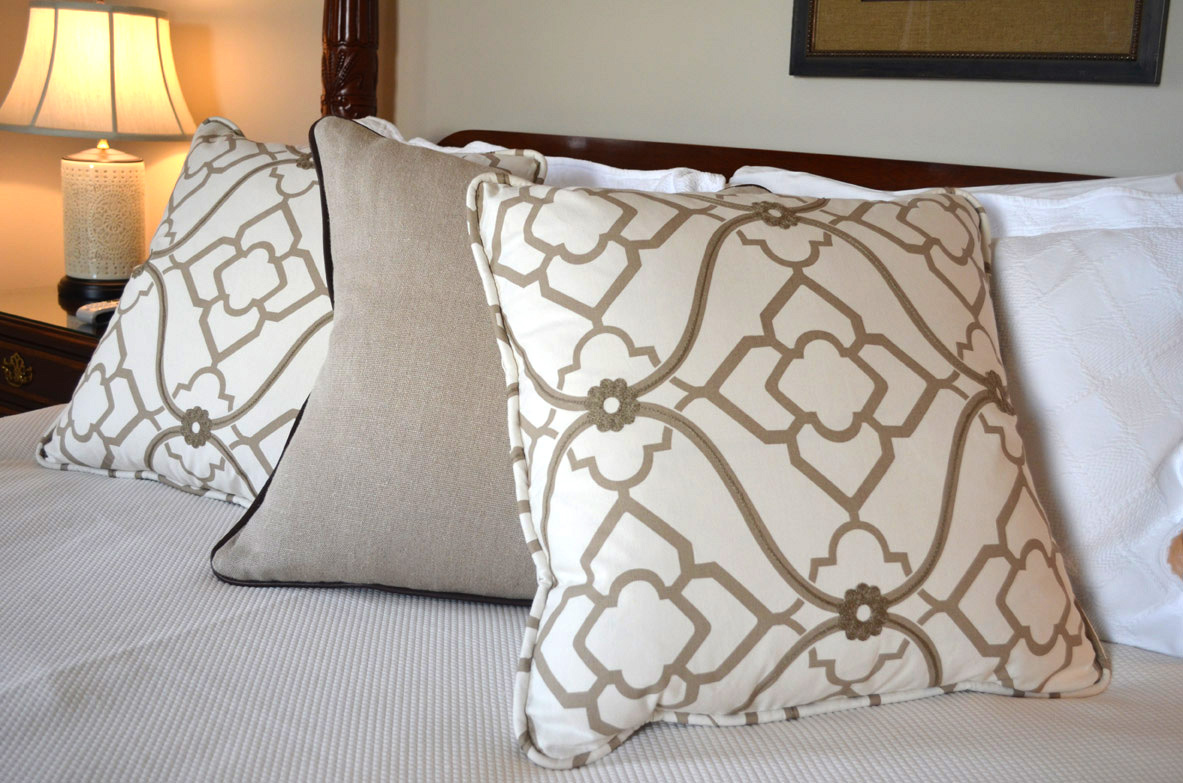 Room 18’s color palette follows these plaster and wheat neutral tones and carries a Moorish motif on the embroidered fabric used on the window treatments and decorative bed pillows.   The medallion design is geometric and Moorish influenced while clean and modern.   Similar to the neutrals of plaster found in Moorish architecture, the room is based on neutral tones of wheat and toast.  The rich dark wood furniture is beautiful and striking in contrast to these off white tones. The rice bed is articulately carved and the armoire is also beautifully detailed.  Selected to repeat the Moorish influence, the column ivory based bedside lamps are delicately pierced with an intricate design.  They are a personal favorite and are softly lit from within and give a soft glow in the evening, very calming for guests before they turn in for the night.