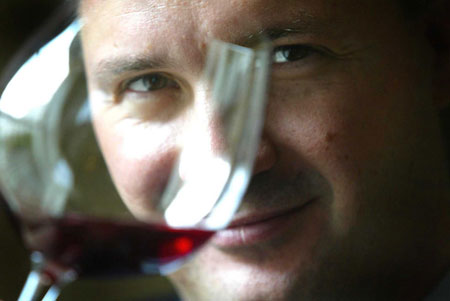 We are delighted to invite you to a spectacular Burgundy Wine Dinner featuring special guest, Louis Fabrice LaTour on March 8, 2012. Maison Louis LaTour is one of the most highly respected family-owned wineries in Burgundy.  Learn more about him in this interview with Wine Enthusiast Magazine:

By Roger Voss
Louis-Fabrice Latour runs his family company from a beautiful 17th-century house on Rue des Tonneliers in the heart of Beaune. Latour, 47, is the seventh generation to run the business and is president of the association of Burgundy négociants. In April 2011, he also became president of the French national wine and spirit exporters association. Since taking over the business, he has expanded the focus on Burgundy by buying the Simonnet-Febvre brand in Chablis and Henry Fessy in Beaujolais. Following the classic education of leaders in French business and politics, he studied political science at one of the top schools in Paris. He then took up the family tradition and traveled the world to understand wine markets and wine trends. Wine Enthusiast recently sat down with Latour over glasses of Simonnet-Febvre’s sparkling Crémant de Bourgogne. We talked about vintages, négociants and family.

WINE ENTHUSIAST: We’re sitting here in your magnificent family offices in the heart of Beaune. You are the seventh to be called Louis. How important is family to your business and to you?
LOUIS-FABRICE LATOUR: We have had vines since 1731, and we have been a négociant-éleveur since 1867. That was started by Louis Latour the first, and we have been Louis ever since. You know, when my father handed the business over to me in 1999, I was still “young Louis.” People only really stopped calling me “young Louis” five years ago. People are always surprised when they meet me. They don’t believe that a large producer such as us can still be family owned, and they are especially amazed that I carry the name of the company.

WE: The 2009 Burgundy vintage is being billed as possibly the best so far this century. O.K., the century is only 11 years old, but do you agree?
L-FL: The ’09 is certainly a great vintage, very different in style from ’05. For me, it is one of the best in a generation. I don’t think I have ever seen a vintage that is showing so well when young. Will it be better than 2005? I think it could be better for reds. For whites, I am not so sure, although they are more balanced than I expected. We are tasting the charm of the 2009 summer.

WE: The role of the Burgundian négociant-éleveur who buys grapes or wines and then blends to a style, ages and sells finished wines has always been important. Do you think with the increase in growers and domaines bottling their own wine, that role is diminishing?
L-FL: In the early ’90s, there was a real challenge to négociants. We saw more and more growers starting up winemaking. Now some of them have come back to us. And we négociants still represent two-thirds of the total crop of Burgundy. In fact, some of those growers are becoming like us, setting up their own négociant businesses on the side, so we remain the role model for Burgundy. After all, that’s how the traditional négociants like us started. One hundred, even 200 years ago, we were growers who became négociants. For us, all wines are as important as each other. Basic Bourgogne Rouge is the most challenging wine for us. Our position gives us the largest possible spectrum of choice. Customers want choice, brand name, reliable quality—and we can provide that.

WE: Burgundy has the reputation of being complex. After all, there are 100 appellations. How do you explain this to American wine drinkers?
L-FL: Well, we have been in the U.S. since the Civil War, so we have been explaining Burgundy to American consumers for a long time. How do we explain? We explain the simplicity of Burgundy, with just two varietals—Chardonnay and Pinot Noir. As Americans, you understand varietals, and so that is important to us. And we work to convince you that there is good Burgundy for $15 or $20. A Mâcon appellation wine should be $15. Burgundy is not just expensive wine. Yes, prices will go up, but I am an optimist, there will always be good-value Burgundy.

WE: Did the movie Sideways [ital] help sales of your Pinot Noir in America?
L-FL: You know, I can’t quantify how much that movie helped. But it certainly made a difference. We were able to go along to wine drinkers and say “we make Pinot Noir” and they understood immediately.

WE: Burgundy is a small world of growers and négociants, especially in Beaune. You must meet each other all the time socially. What do you talk about?
L-FL: We definitely don’t talk business. We may talk wine styles. But, don’t forget, we all went to school together, we go on holiday together. We know each other well enough to get over disagreements. That’s one of the strengths here in Burgundy—we are good players. We compete, of course, but it is competition between people who have no real differences, which makes it very fair competition.

WE: You’re the seventh Louis. Is there another?
L-FL: I have an 11-year-old son. Of course, he is called Louis. If he joins the company, he will be the eighth generation. But I don’t want him to come into the business unless he really wants to. You have to love this business. —Roger Voss