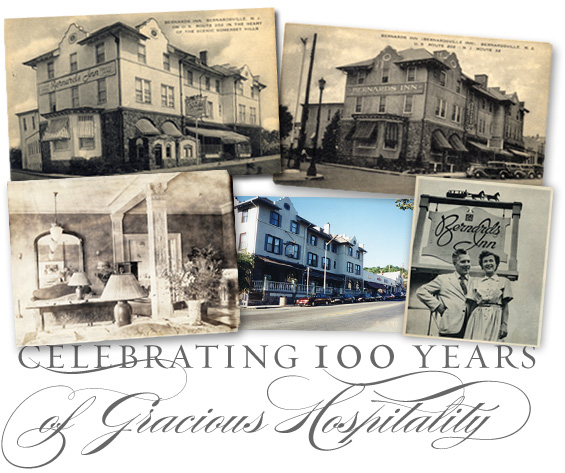 The Bernards Inn, a historic and landmark property, has a long and storied history. Not all of the details are known about its many owners and renovations. What is known, however, has been culled from newspaper and magazine articles published at the time.

The Inn was first opened in 1907 by brothers Fred E. and Frank A. Ballentine of Church Street in Bernardsville, NJ. The building’s construction, which began in 1905, used stone from an old stable that stood on Main Street (now Mine Brook Road) in the center of Bernardsville before being torn down that same year. Some of the other architectural details included in the building’s construction were the mirrors, mantels, and hand carved columns and the lobby staircase posts, railings and balusters from the original Hotel Plaza in New York City. The lobby staircase still exists today. Likewise, the stone foundation can be seen in the Wine Cellar on the lower level. After running the Inn for a short time, the Ballentine brothers sold it to Mr. W.H. Parke, a gentleman with great experience in the hotel business. During his distinguished hospitality career Mr. Parke was the assistant manager of the Waldorf-Astoria for two years.

Like many Inns, The Bernards Inn became the first venue in town to advertise for moving pictures and illustrated songs which were presented in the auditorium beginning in 1912. Also in its early days the Inn was home to some famous motion picture stars, including Mary Pickford and Norma and Constance Talmadge who were shooting scenes in the area. In 1915, a group of 35 motion picture actors stayed at the Inn for six weeks.

Following Mr. Parke, the Inn was owned and operated as a hotel and restaurant by Mary Koester of New York until 1920. Not long after the 18th amendment to the U.S. Constitution went into effect in January 1920, which banned the manufacture and sale of alcoholic beverages, business dropped off dramatically. Mrs. Koester gave up the business and the property fell into the hands of the Commercial Trust Company of New York. Until the 18th amendment was repealed in 1933, at least four illegal bars, known as “speakeasies,” operated in Bernardsville. One of those speakeasies was The Bernards Inn. The Inn was known to have been raided on more than one occasion by the local police.

In February 1922, Fred Ballentine purchased the Inn from Commercial Trust for a price that was believed to be under $25,000. At the time, the Inn consisted of a lobby, dining room, bar, kitchen, store room, laundry, private meeting room, a large auditorium, several stores and a post office on the main floor and 38 fully furnished bedrooms on the upper floor. The lower level included a bowling alley and pool and billiard rooms. The Inn had been closed since Mary Koester gave up ownership with the building remaining idle until Mr. Ballentine bought back the property.